Roswitha (Galland) Kaatz brought me to the Schuhplattlers in the spring of 1959 to practice with the rowdy bunch. I was a sweet young and shy girl and you can imagine listening to Max’s jokes and his finer songs. They certainly made some of us blush. Our first Schuhplattler Octoberfest was held at the Bowness Community Hall. The place was packed. All of the dancers were very busy being waiters, bartenders, cooks, dishwashers. At the end of the evening everyone mopped and cleaned up the hall and then and only then did we sit down for a well deserved beer. We were all very tired and we all had aching feet, but what a success it was! 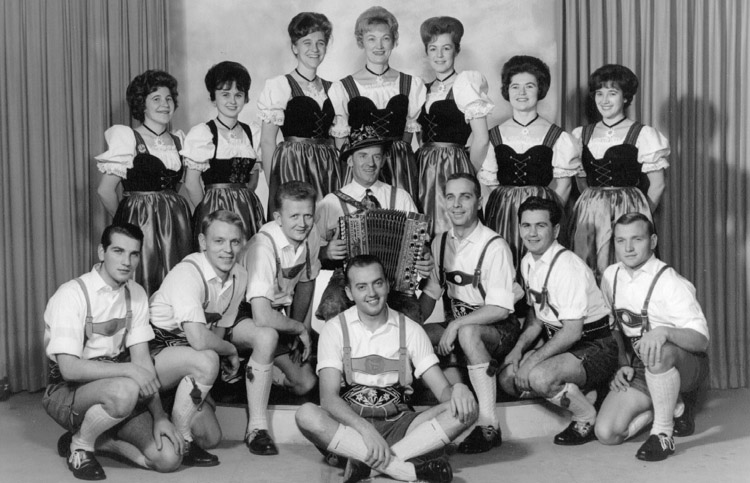 I guess you could say that this group started all the Octoberfests in Calgary and a number of other places across Alberta and British Columbia. Our practices were held at the German Canadian Club, Vic’s studio, the old Brewery and the Rosedale Community Hall. Many of our annual dances were held at the Danish Canadian Club. Heinz Stolz and Herman Klinke made sure that we were there on time, had clean shirts and pressed blouses and when it came to performing that everyone listened – and listen we did. I admit that there has to be a certain amount of discipline in any group. After the performances we could always relax and enjoy ourselves, although we certainly had fun dancing ourselves, otherwise we wouldn’t have been there.

The Schuhplattlers performed at the Glencoe Club, Winterclub, the Golf and Country Club, the Palliser Hotel, RCAF Lincoln Park, the German Canadian Club, many times at the Gasthaus, the first big Octoberfest at the Round Up Centre and of course at the opening of Kimberley’s Beer Festival. Our travels took us to Sacramento, California, and all over Alberta and British Columbia including: Medicine Hat, Lethbridge, Red Deer, Ponoka, Banff, Golden and Kimberley.

These are some of the highlights that I remember: We performed a play called the Strohwitwer, in Medicine hat and some of use (Vic!!) forgot their lines, so we all had to improvise to suit his lines. Vic was cooking a “Schmarren”, but we forgot to bring a small pot along, so somebody went out to the back of the hall and found a old car oil can with the label showing. This was quickly handed through the back window just in the nick of time when it was needed. At the Banff School of Fine Arts, we slept in bunk beds. The guys thought this was great as we could not get separate accommodations at the school. The then famous and very handsome world Champion downhill skier Tony Sailor was a special guest at the dance – you should have seen all the girls swooning over him, I think some of our guys felt a little neglected that evening.

Our trip at the Octoberfest in Sacramento in 1963 was a whirlwind tour – what a week, 3 days entertaining in Sacramento, then we took a side trip to Stateline Nevada, a smaller version of Las Vegas. That day we danced in the afternoon and evening and after that we took a bus to Stateline. We were up all night. We walked down the street with Max and his accordion at the front and the rest of us walking in a goose march behind him. We had one foot on the sidewalk and the other foot on the street, marching from one casino to another. We then took the bus back in the early morning to Sacramento. Some dancers took a shower, some took a quick dip in the pool, others took a quick nap. The ladies put on lots of makeup so we wouldn’t look so washed out. The it was back to the show, dancing that afternoon and evening. Tired or not it was a lot of fun.

One time we were invited to Golden BC., when a snowstorm hit, we encountered whiteout conditions almost all the way from Calgary to Golden. The ladies in particular wanted to turn around but our fearless leader Heinz Stolz would not give in. Our stomachs were full of butterflies all the way. We finally arrived around 10:30 PM to a rousing ovation from the audience. We quieted our nerves by having a few drinks, and went on to have a great performance and a fun evening. Another time Leo, Vic and Max Rieberer, were doing a small skit. Part of Vic’s job was to wash a statue who was played by Leo. Vic began washing the statue from top to bottom with a rag. When he got to the navel he had this surprised look on his face – there was no navel to be found (due to an operation we found out later from Leo). None of us could stop laughing, it was hilarious.

Trudy Geier remembered a humorous incident that occurred when we danced at the Banff Shire Inn. Some of the people thought we were Hutterites because of the outfits we were wearing. We also made a film at the front of the Chateau Lake Louise on a hot sunny day. We felt like film stars for a day as there were many vacationers there to watch the filming of the Schuhplattlers. We had some other talented people in our group. Vera, Anne, Uschi and Freddy who learned to yodel and sing with a lot of enthusiasm. Of course Max was always there, as we could not have done without him. The rest of us did our bit to make the group work, whether it was to teach Val and Manuel how to dance with Adele or do book-keeping, secretarial work or simply be there for all the practices and performances.

The addition of the children’s group who were managed and coached by Leo Kladnik, played an important role in the continuation of the Schuhplattlers. No matter what the name of the group at the time, along the way we made many friends and acquaintances and we had a lot of fun. I must say once a Schuhplattler always a Schuhplattler. 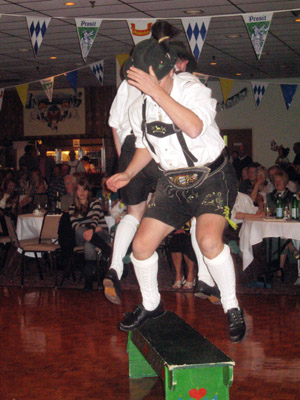 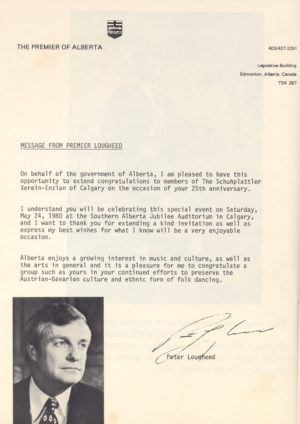