In the mid seventies the enterprising members of the Schuhplattler group were determined to obtain “Tracht” and join the “Gauverband Nordamerika, Inc.”. The costumes were very expensive, and it was decided that the group should attempt to obtain government funding. In order to qualify for the grant the group had to register as a Non-Profit Society. However, a review of the existing Gauverband groups revealed numerous other Edelweiss Verein. It was decided that the name of the group should be changed to the Schuhplattler Verein Enzian. Even though the name had changed, the members and their antics remained the same.

In 1974 the Alberta Government sent the Schuhplattler group to Spokane, Washington for the World’s Fair. It was one of the hottest weekends on record! After each performance at the Alberta Pavilion, Max with his accordion led the procession of dancers to the beer tent on the grounds. On the way, we collected onlookers who wanted to join in on the fun. The beer tent filled up quickly and with the Schuhplattlers leading the “Ein Prosit” we drank the place dry. In the evening we went to a German restaurant and, funny thing, they ran out of beer too!

When dancing at the Banff Springs Hotel the Schuhplattlers usually had overnight rooms in the basement. After the evening’s performance we usually got together and had our own little party. One time we decided to have a theme night, a toga party. It just so happened that the bed linens that night were a peach colour. It was quite a sight, we looked like a Hari-Krishna convention!

One of the most crowd pleasing features of our group over the years has been it’s ability to involve the audience in our performances. We have exposed numerous colours of long johns and mismatched socks and cowboy boots during or “Fremds”. One performance is especially memorable. While performing the Zweisteirer a female patron inadvertently exposed one of her assets as she went from figure to figure. In true Schuhplattler style she merely slipped her asset back into her dress and kept on dancing without missing a breath. How could anyone ever get bored with such hands on participation as this!

When they first learn to dance and then perform the “Mader”, some of the newer members of the group are mystified as dancers in turn call out the names of various fruits and vegetables when they look at each other across the centre of the circle. When asked about this, a story is told about how the Schuhplattlers were asked to dance at a Food for Less store as part of a German promotion. The only area large enough to perform in was located in the fruit and vegetable section. As the dancers progressed through the opening figures of the Mader they were tempted to sneak a few things from the vegetable bins. Now each time that the Mader is performed you’ll see smiles on the dancers faces and hear them muttering things like “eggplant”, zucchini” and “radishes” under their breath.

As all Schuhplattlers know, sometimes getting to a performance on time can be a feat in itself. There is a story of how the Schuhplattlers traveled to Europe in 1986 and were to appear on an Austrian radio program while they were there. The program started at one o’clock, and in true Schuhplattler style they arrived at 5 minutes to one. With most performances when someone tells you that you’ll be on at one you end up waiting for at least half an hour before you perform. But this was radio and when they say one they mean ONE! In the flurry of activity that followed it was necessary for the technicians to get in a sound check before going on the air. So the group set up for the Knappentanz and proceeded to hit their chisels, only to find out that they couldn’t hear the music at all! Their timing was completely off and they were due to go on the air at any second. They asked for just a little more practice time but by then it was too late. The quick thinking sound technicians turned the sound monitors around to face everyone and turned on the music again – it was “show time”. Things went beautifully and they never sounded better. If only people knew what goes on behind the scenes!

Schuhplattlers don’t usually participate in dance marathons, however once we were called on to do just that. In 1993 we were asked to perform in the tiny community of Flatbush, Alberta for their Octoberfest. We strapped our benches onto the roof of a van and made the long trek northward. Once we arrived we discovered that we were the only entertainment for the evening (the DJ was coming later). At the insistence of the people of Flatbush we performed a on and a half hour show! We danced, and in between we schunkled to the accordion, we played the cow bells, we described the dances and our costumes, anything to let us rest and catch our breath. In the end the audience thought we were terrific and we joined them in an Ein Prosit for a well deserved 17 cases of beer! 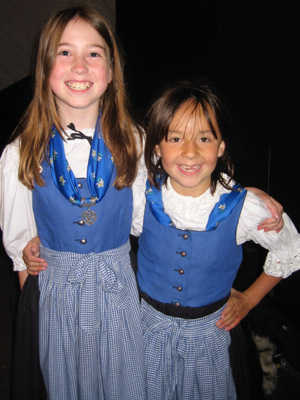 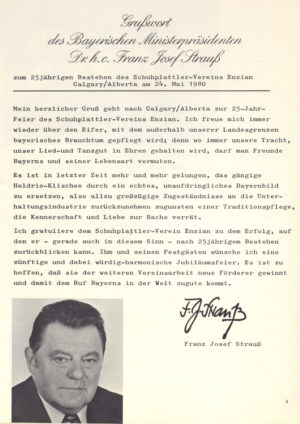